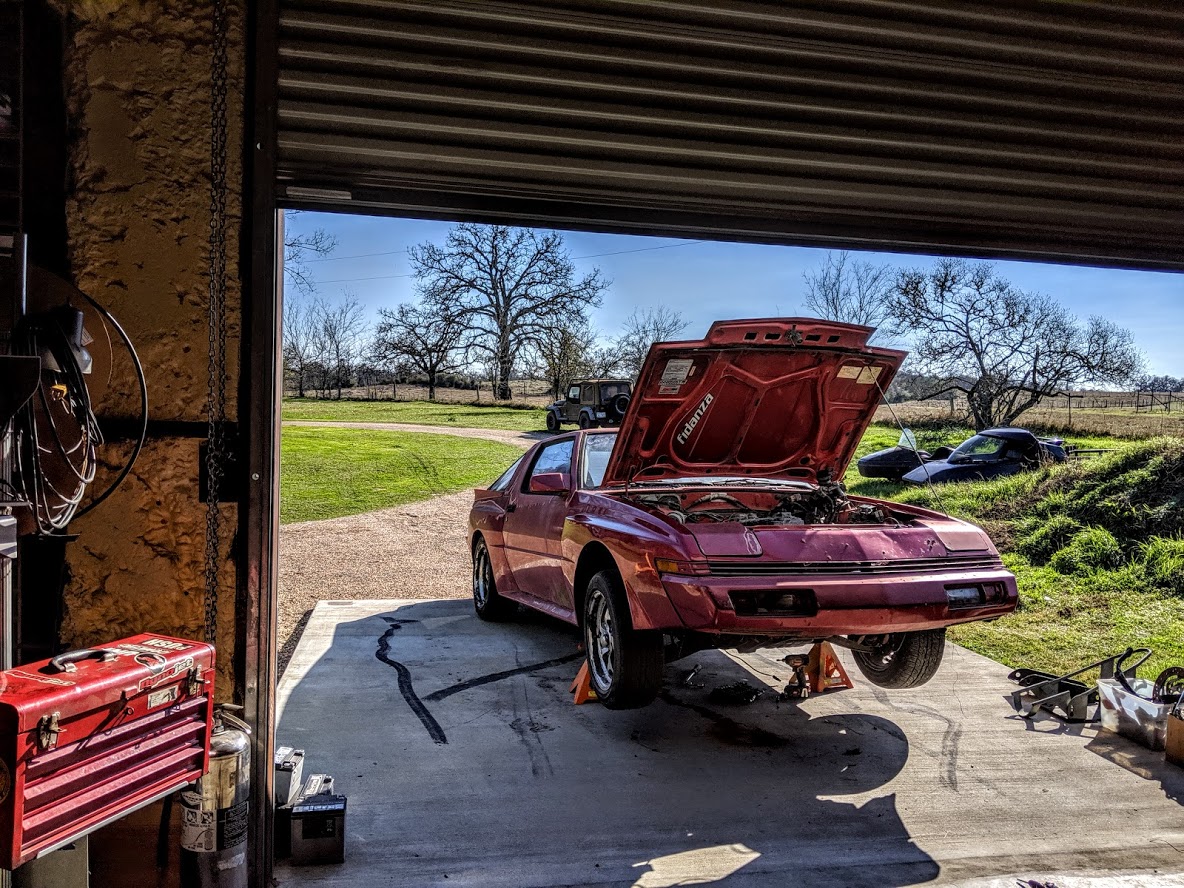 After much deliberation, I’ve decided to pull the engine and trans. The clear coat is gone and the engine bay never really matched the rest of the car anyway. So let’s go ahead and paint it. Might as well let Mike Lapp do it right. I’ve also decided to swap the engine entirely. My maniac Toyota tech friend Steven has me thinking of using the Toyota 1UZFE. They are over-engineered and available. The early ones have beefier rods but the later ones have VVTI. They all hold loads of power even with stock internals. I’ll have to figure out a transmission too because Toyota didn’t make a manual trans for that engine and I refuse to go auto. I’m sure I can convert it with a custom bell housing or something. I’ll need to do more research but for now, we are pulling parts. Today Ali and I pulled the car out of the weeds and moved it up front where the real shop is. Once on the concrete, I put it on jack stands and started off working like we all do, by just laying under there and looking around disgusted for a while. After gathering courage and building motivation I proceeded to disconnect the driveshaft and transmission bolts. Lucky for me half of them were already missing. I removed the radiator and started cutting my old exhaust system with a Sawzall that had the shortest blade imaginable. Why do they even make blades that small?! Finally mangled it enough to kick it in half and drag it out. I got the air hose and started blowing out cobwebs and other trash preparing myself for what was to come. Ah yes, the old transmission on the chest trick. I must have done this job 10 times back in the day. Once for replacing the first transmission, I blew up thanks to a short-shift kit and my teenage aggressive nature. Once again for replacing a clutch, once again for upgrading the clutch again and installing the Fidanza flywheel. Once again when we swapped the engine and again… Never on a lift and always onto my chest on the hot concrete. It was nice out today being December although I must be fatter than I used to be because I almost couldn’t get out from under it this time. Remind me to go up one notch on the jack stands next time. I at least had the sense to have Ali nearby but honestly, I think the worse of it was forgetting to drain the clutch fluid and having dot4 or whatever it was running down my armpit. I also managed to spill out probably all of the transmission fluid. I had left the driveshaft attached to the trans hoping to avoid a mess, but it slipped out anyway. Why in the hell didn’t I just drain it? I had to have Ali take off my shoe and look it’s a long story and hindsight is 20/20 but I got the damned thing out, didn’t I? All I know is that it’s not going back in that way. Hell, It may never go back in for that matter.

That’s enough for today. I’ll pull the engine next weekend and get it on a stand so i can tinker with it inside the shop. I want to know what failed but I’m also pretty determined to do the swap.